Authentic Victorian Castle overlooking the Berkeley Springs State Park. Built as a summer home in the 1880s (no longer open for public tours). Get Directions. 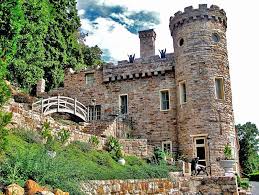 An Icon of Berkeley Springs, the Castle was built in late August 1887 and was the home of Colonel Samuel Taylor Suit of Maryland and remained in his family until it was purchased in 1923, where it served as everything from a hotel for a short period, to a Club, a shop, an artists’ retreat and more. It was purchased again in 1936 was it faired as the location of a hobby fair before being purchased again in 1954. The castle has since been known for the tours that took place from 1954 to 2004 and the ghost stories from those tours. The castle has a dungeon in the basement the focal point of many of the ghost stories about the castle. The Tours are no longer offered but the castle still does special events like weddings. It is a sight to see!